Disclaimer: I don’t give two horse dicks about any of this drama shit. I’m just using it to selfishly draw attention to my own books. Fuck anonymity. I want the money. This is how you monetize a goddamned rant, son.

But first, buy my shit. Banned everywhere. You don’t wanna fuck with it. YOU SHOULD NOT READ THESE BOOKS! THEY’RE VERY OFFENSIVE! YOU’VE BEEN WARNED! Seasons 4 and 5 coming in the next few months.

AVAILABLE IN E-BOOK AND PAPERBACK ON AMAZON!

So I’m sitting here with a bottle of ‘livet in the morning, dropping a deuce burger. I scroll across my phone and come across more book world drama. How fortunate is this for me? I mean, I don’t give a shitdick about any of it, but it’s popular, and I’m not above using it to promote my fuckery. I’m always looking for a way to draw attention to myself. It’s perfect timing since a book about me hits shelves on Thursday. I need to capitalize. Seymour and Seester need to make that fucking money. Buy some Larry merchandise too. It’s right here on the site. (click here)

Anyways, I just don’t get it. Not the commentary on the drama. No, no. What I don’t get is why these people are always anonymous as fuck. I mean, grow yourself a decent sack lunch and name yourself. Get some boll weevils in your pleated Dockers. Why? So people can buy your shit. Channel that hate into some dollar bills. Otherwise, why in the tits do you care? Hit unfollow if you’re not going to make some money. Stop being amateur as fuck.

Hold on a sec, I need a swig of the sweet juice. Ahhh, much better.

Oh yeah, pussy shit. These fuckbabies need to learn a lesson. And I need people to buy my books. There are links to everything below. Click those motherfuckers.

Also, why don’t you be original? Learn a thing or two about creativity. Strike out on your own and be a Larry-style pioneer. We’ve all seen this pussycock shit before. Let me give you that motherfuckin’ play by play:

1) author thinks they write the best shit ever penned

3) author sells zero books outside of family and friends

5) author tries to figure out how to sell books, realizes it’s harder than a honeymoon summer sausage

9) author makes a website to fight the injustices of the world, when vigilarry justice is the only way

I just gave you the nine. So did Timmy. We’re hip-thrusting your face right now too. Donnie is high as fuck and just yelled, “Preach it, brother!”

I’m not done yet. Hold on to your tittyflaps.

This cuntbilly shit has been done a million times. Why don’t you grow yourself a decent cocker spaniel? Maybe you should read my books for inspiration. I’ll even send them to your cunt of a kindle with your literary quote on the front of it in flowery calligraphy.

Stop being a Jimmytit and worry about your goddamned self. Always up in a motherfucker’s business and shit. I swear to god, man. Sometimes I want to walk out into oncoming traffic and just cake the fucking dust with all these Darwin dodgers running around this shithole of a planet. Bless this land for providing me with weed and ‘livet.

Larryballs preaches the goddamn gospel. People worried about housewives fiddling the jellybean to models. How about you get to fucking work. You kidding me? Like you don’t peckershine your crotchtwiggy to the shit you write? People nutblasting to words. Everybody does it. I’ve yanked my sausage hammer to this post three times already. It’s that damn good.

This tittydick generation, man I swear. You’re always up in the middle of someone’s shit looking for corn. Put your nose in one of my books and learn a thing or two, then go get some ‘livet and a blowjay. Your shit is weak. Now go eat your pills like good little whores do.

The name is motherfucking Larryballs and I approve this message. 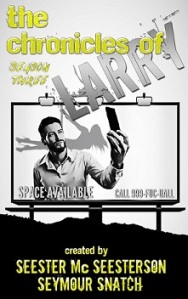 Add season three of Larryballs to your Goodreads TBR!

There is only ONE Larry and he has scotch to drink and assholes to fuck up.

Read his muthafuckin’ books or the Darwin dodgers of the world win!

YOU CAN BUY THESE LEGENDARY TALES OF CUNT FUCKING AND DEBAUCHERY FOR A MERE 99 CENTS EACH. WHAT ARE YOU WAITING FOR? GROW SOME BOLL WEEVILS IN YOUR PLEATED DOCKERS AND READ ABOUT ALL THE SHIT YOU WISH YOU COULD DO EVERYDAY.

(Season three is coming July 27th, 2017! So go eat your pills like good little whores do and Uncle Larry will have the good shit for you soon.)

When Seymour is not writing stories of cunt fucking and debauchery he enjoys growing jalapeno peppers in the shapes of dicks. He has also mastered the craft of urinating from towering heights. Nicknamed Niagara Balls as a child, his most recent exploit was pissing from the observation deck of the Burj Khalifa in Dubai where he was dubbed the “Sultan of Streams” by the local natives.

When not acting as a master wordsmith with Snatch, McSeesterson enjoys farting up local eateries and leaving gratuities that only contain the number nine. When asked about her favorite activities McSeesterson has been quoted as saying, “Watching someone eat a crop dusted cobb salad…” is something that she “enjoys immensely…” She has also described a good fart as “Eerily similar to a three act play structure…” which has made her “More cognizant as an author with regards to timing and pacing…

82 thoughts on “Thoughts On The Book World Drama – with ‘Livet”